When I was a child, I was sitting in the backseat of my parent’s car. My father was picking my mother up from her night school class. As she entered the car, he said three words that I will never forget, “they shot King.”

King’s assassination sparked days of rioting throughout the nation. The Michigan National Guard was deployed to quell the violence. Guardsmen pointed their rifles at my face as they drove down my street in tanks. They laid their handcuffed prisoners on our lawn. A nearby gas station was set on fire and exploded. Most of the stores were burned. I saw a man shot in the head. 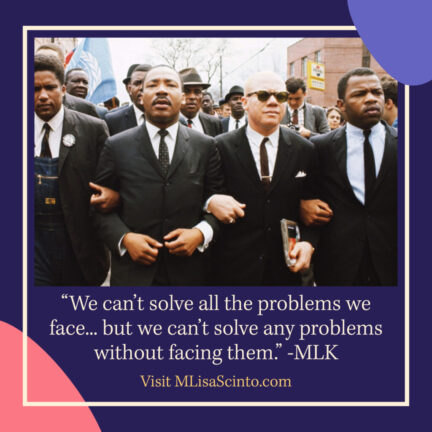 President Johnson said to bi-partisan congressional leaders, “In a time like this, all good men should ask themselves what can I do to advance brotherhood and equality in American society.” The Fair Housing Act was passed shortly after. Many gains were made.

In 2022 I find myself in an America that is regressing to the America that I grew up in as a child. To me, it’s almost inconceivable that we’re struggling to pass voting protections and that voter suppression is a major issue. Dr. King worked tirelessly and gave his life to help legislate civil rights for all Americans. Civil rights that I did not possess as a newborn in  1954. I shutter to see them being dismantled during my grandchildren’s childhoods.

The reason these things continue to happen is that they are not faced. Our children and grandchildren will grow up with these types of recurring societal disruptions if we don’t openly discuss racial inequality in American society and seek ways to be a part of the solution.

Scripture says prayer without works is dead. I grew up across the street from a Lutheran Church. The church was all-white, but the neighborhood became all black after my family moved in. In the midst of the riot, the young white pastor set up a table in front of his church with food for the people in the community.

A Former Principal’s take on the Tragedy in Uvalde, Texas